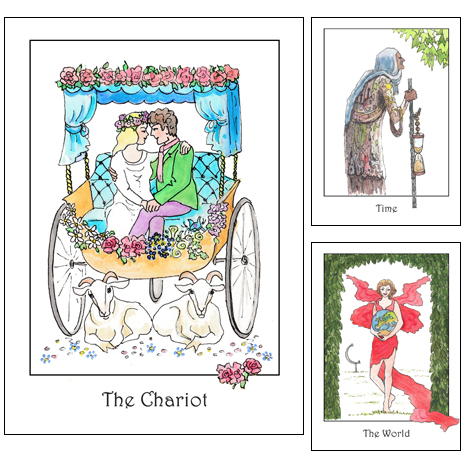 Imagine a fancy dress party inspired by the characters of the tarot majors, during which the little Fool spots a blue butterfly and steps right out of the frame.

Scenes of tarot and Lenormand follow, in which the life of this deeply symbolic little creature is reflected by the revellers in a never ending cycle.

The Little Soul's Party is a combination tarot majors and Lenormand deck in which some of the cards with identical titles - Sun, Moon, Star and Tower - serve both sets. The High Priestess has become The Sibyl, The Hierophant is now The Alchemist, The Hermit is Time, Justice is Mother Nature, The Hanged Man is The Dreamer, Death is Transformation and Judgement is The Angel.

The two systems may be used separately or together, the only limit being to the method used being the reader's imagination...

Note: Due to increased Tracked and Signed For postage and shipping costs, Pen decided to move away from very small, expensively produced, signed Limited Editions and make future tarot and other cards available as Print on Demand. The Little Soul's Party is available from the Make Playing Cards website.

© 2018 Figtree Press. All rights reserved. Made By Alphanet.